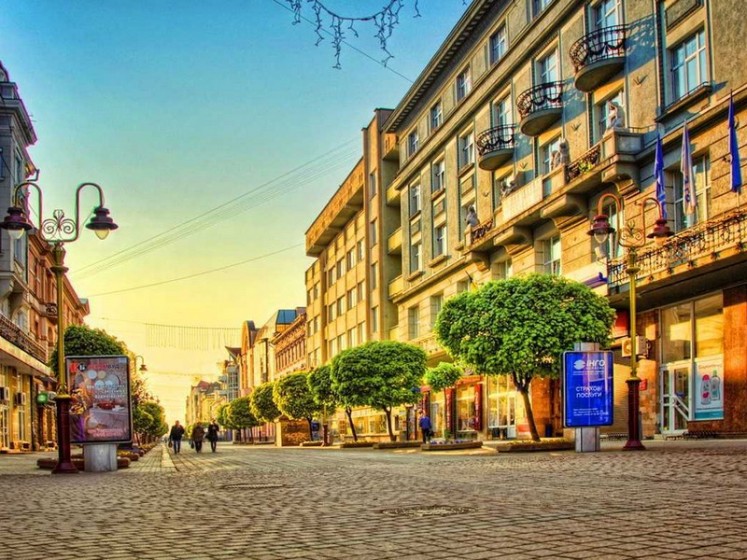 A picturesque city with a long history - Ivano-Frankivsk. It is called the heart, the pearl of the Carpathians. This is a city of polyglots, because no matter what language you speak, they will understand you, or they will find someone who understands and can help.
In Frankivsk, various traditions and customs of Bukovina, Transcarpathia, Hutsul, Pokuttya and Opole are combined. Having been here, you might think that this is a European city, not only because of its appearance, but also through people who think soberly, in a European way ....
The city was founded in 1662 by the local Polish magnate - Andrei Pototsky, and named after his son - Stanislav. And in 1962, the name was changed in honor of the outstanding Ukrainian cultural figure, writer Ivan Franko - Ivano-Frankivsk.
The city is closely connected by a network of highways with all cities of Ukraine, and the countries of Europe and the CIS. The city has an international airport that operates flights to other countries.
Ivano-Frankivsk was for some time the capital of ZUNR. It is unfair that he is considered the "temporary capital", because the most important pacts and treaties of the Western Ukrainian People’s Republic were signed here.
Ivano-Frankivsk is called the city of festivals. About 15 festivals take place here annually.
Ivano-Frankivsk is considered a city of sport and it is not in vain. Today, the city is widely developed 45 different sports. Think about it every year. Frankish athletes receive 200 (!) Medals in various world competitions and championships.

Rest in the pearl of Carpathian

Ivano-Frankivsk will be able to inspect in one day, but why? We advise you to stay here longer. The architecture of the city and its old, narrow streets fascinate with its beauty, and as if pleading: "- Do not leave, stay!".
If you are going on a vacation to Ivano-Frankivsk, then this article will be very useful to you. We have prepared a list of places that you must visit, see and enjoy in full. So, let's start the journey!
The first thing to visit in the city is the town hall. There is an observation deck on it, from which you can see the whole, beautiful city. From it everything will be visible, clearly.
Cafe "Says Ivano-Frankivsk", is considered the best and most original in the city. Indeed, legends and real life stories of the city are engraved on the countertops of the cafe. Waiting for coffee - you can find out a lot of interesting things.
Walking around the city - do not rush! Enjoy the atmosphere of the city and its beauty.
The treasury of art in the Carpathian region, according to the Museum of Art. It is located in the oldest building of the city - the church of the Immaculate Conception of the Virgin Mary. The museum has many exhibits made in various styles: icons, paintings, sculptures. Interestingly, it contains works not only of Ukrainian, but also of Russian, Polish, Hungarian, German and Austrian painters.
The city has theaters, drama theaters, philharmonic societies. If you are a connoisseur of theatrical or musical art, you will have something to do.
The most important for the city is the Heavenly Hundred Museum. It collected 500 items brought from the Revolution of Dignity. In our opinion, both the adult and the small should visit the museum and realize the whole necessity of the Revolution of dignity and the great price of victory in it.
"One hundred" is the legendary symbol of Ivano-Frankivsk. Its length reaches 500 meters. There are many restaurants, cafes, shops and other institutions.
Walking along Taras Shevchenko street, you can get into the park to them. T. G. Shevchenko. A walk in it is extremely romantic. Optionally, a walk can be completed by boat.
Fourteen interesting facts about Ivano-Frankivsk:
• Climbing to the observation deck in the shopping center "Legend", you can see the Town Hall and many other places from a bird's eye view.
• The bottle of Carpathian Balsam is considered to be the best souvenir from Ivano-Frankivsk. You can buy it in any city cafe or souvenir shop.
• The shortest and narrowest street in the city is Ivan Trush Street. Its length is 65 meters and its width is 6.
• The world's only egg monument is located here.
• Under the city there is a whole system of underground passages. However, so far only one has been met.
• On the central square of the city, executions were previously carried out. Therefore, the Market Square has another name - the area of ​​death.
• Electricity in the pearl of the Carpathian region appeared at the end of the XIX century. January 13, 1897, electric lamps began to burn at the station.
• The city hall also boasts uniqueness. The Frankish Town Hall, the only one in the world, has a helmet-shaped dome, which is also even gilded.
• The path in front of the gates of the Potocki Palace was established in the 17th century.
• On one of the high-rise buildings of the city its coat of arms is depicted. However, it is located so high that some residents of the city still do not know about its existence.
• The city gave us Vasily Virastyuk - the most powerful person not only in Ukraine, but also in the world.
• Although there are buses and trolleybuses in the city. A large number of petty bourgeois prefer hiking.
• 1662 is considered the year the city was founded. But there is no true confirmation of this.
• Previously, Ivano-Frankivsk, then Stanislav, was only a military fortress. Which consisted of six bastions interconnected.

Unfortunately, no one has the opportunity to visit Ivano-Frankivsk now. But no one forbade arranging a virtual trip. You can watch a large number of documentaries about the city. A good addition to the virtual trip to another city will be Ossetian pies. You can order them on the website or by phone. The selection of delicious pies in our bakery is very large. We bake sweet, savory and vegetarian pies. You can order not only pies from us, but also natural fruit drinks, which are not only tasty, but also healthy! Having ordered pies for the sum from 250 hryvnias - receive free shipping. By the way, our couriers are quick and agile, so you will receive your order in no more than an hour. Delivery is carried out in Kiev and the suburbs.
Товар добавлен
Перейти в корзину
Callback
Letter to the director
Sign up
Enter