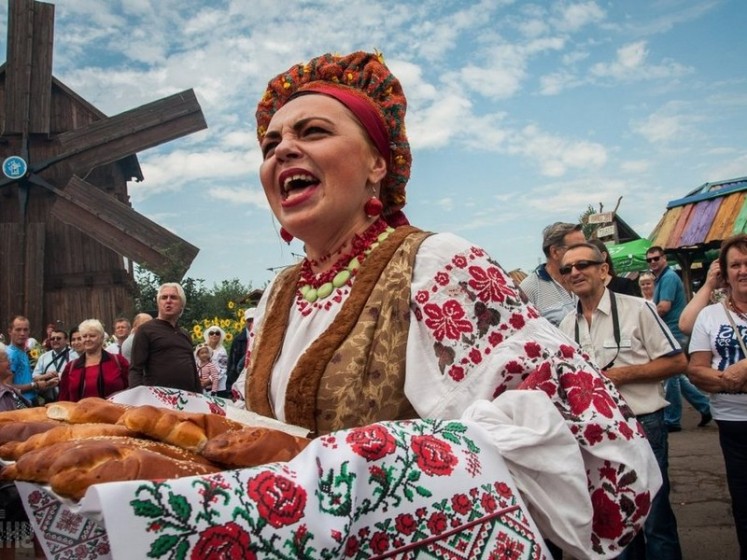 In the Poltava region there is an old and very beautiful custom, every year in the village of Bolshoi Sorochintsy they hold a fair. Sorochintsy are known all over the world, because people from all over the world constantly come to it. The fair is held in late summer, in the last decade of August. Even the famous Russian writer, Gogol wrote about this event in his works. For example, in the story "Sorochinskaya Fair" he described people who came from different cities of the country to a famous fair.

Ukrainian fair movement has a great history. In 1840, the number of fairs in Ukraine exceeded 12,000. Sorochinsky fairs belonged to them, but then it was neither big nor famous.
Fairs existed until 1920, then they were completely closed. But already in 1966, they began to actively recover, Sorochinsky fairs also did not stand aside. And from August 1999 until now, by order of the President of Ukraine, Sorochinsky Fairs received the status of National.

In 2017, on the first day of the famous fair, a record number of visitors and event organizers was recorded. Another record holder of the fair was a huge loaf. This record was even recorded in the National Register of Records of Ukraine. His weight was more than half a ton, he was recognized as the "heaviest loaf of the country." And they baked it at a bakery in the city of Kharkov, and called it “Peace punishment”. As far as we know, he was cut and sent to all areas of the country. There they were to be cut into pieces and transferred to hospitals and orphanages.

Fair through the eyes of a tourist

Many residents of Ukrainian settlements and cities come here in order to sell their goods, and instead to buy others. On this day, representatives of many Ukrainian enterprises bring their products here for advertising and sales. Factories and factories conclude cooperation agreements with one another and make it mutually beneficial.
Also at this fair it will not be difficult to meet many famous and talented people of not only our country. Every year, various charity concerts and exhibitions are held at it, where visitors can see paintings by leading Ukrainian artists and ancient folk art.

In Sorochintsy, during the fair, at every step you can find tents with anything, but tents with:
• souvenirs.
Each of the visitors wishes to bring home the memory of the fair. Therefore, finding a fridge magnet or a souvenir mug is not a big problem.
• embroideries.
Embroidery is the national clothes of Ukrainians. Therefore, apparently, there are no events in Ukraine at which they would not be sold. In Sorochintsy, the choice of shirts is extremely large. You can find simple t-shirts with a full ornament, as well as handmade shirts or dresses.
• decorations.
Here you can also find jewelry made by yourself. The beautiful half of humanity chooses unique brooches made in one copy or a traditional wreath-hoop.
Also at this fair you can find drinks and snacks for every taste. Most preference is given to beer, vodka and homemade liquors. And for appetizers they buy khachapuri, bagels, pretzels and pies. Sorochinskie pies are known for their taste throughout the country. They can be found here for different tastes and preferences. But if you want pies, then you do not need to go to the Sorochinskaya fair, because we have a large assortment of Ossetian pies and you can find exactly what you want. And we also have delivery in Kiev, so you don’t have to go anywhere, just wait.
Товар добавлен
Перейти в корзину
Callback
Letter to the director
Sign up
Enter