"Zaporizhzhya Sich" and the island of Khortytsya 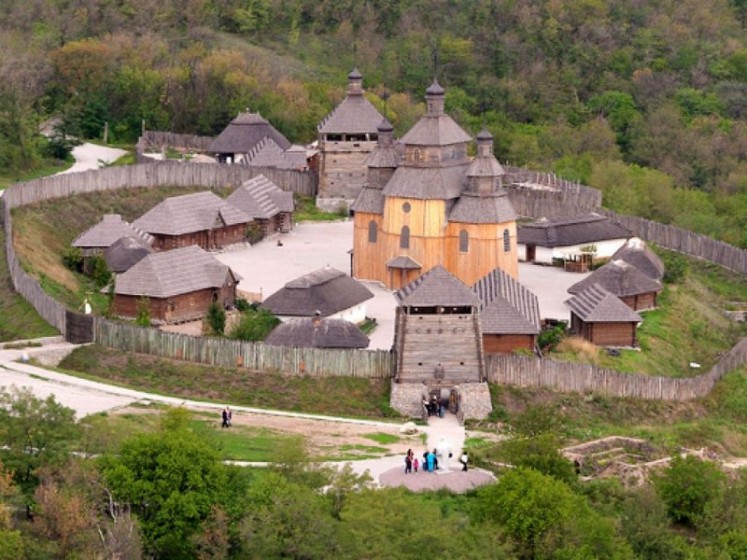 Surely most of us have heard about the Zaporizhzhya Cossacks, about the island of Khortitsa. This is a visiting card of the city of Zaporozhye, and one of the attractions of all Ukraine. He who was in Zaporozhye and was not in Khortitsa was not in Zaporozhye. Such places in our country are worth a visit. We strive to visit abroad and do not notice and do not appreciate those beauties that are around us.

Khortytsya is an island in the middle of the Dnieper River. It is also a national reserve and a unique historical place. In 2007, the island of Khortytsia was recognized as one of the "Seven Wonders of Ukraine." He is beautiful in his nature. In a relatively small area, you can find meadows, steppes, and even coniferous forests. However, Khortytsia is not the only known nature. The island has a huge history, which is known far beyond the borders of Ukraine.
The first inhabitants lived in the 3rd - 2nd century BC. The stone sanctuaries that have survived to this day, but which date back to the 2nd millennium BC, testify to this. The next inhabitants were the Scythians, who lived on the island from the 7th to the 3rd century BC.
But, of course, the most famous residents of the island of Khortytsya are the Zaporozhye Cossacks. The first Cossack fortifications appeared in 1556 and since then the island has been the center of all Ukrainian Cossacks. There are many different books, legends, films about this place. But it’s better to see it all with your own eyes.

The historical complex "Zaporizhzhya Sich" is an integral part of the city of Zaporozhye. Every year thousands of citizens and visitors come here. The construction of the complex was started in 2005. Of course, this is not a copy of the battle that was with the Cossacks. However, it is built in the likeness of the real Sich. It presents traditional structures, such as a fortress with moats and towers, secular buildings. The complex will help you understand what the Zaporozhye Cossacks were like during its existence. Zaporizhzhya Sich is fenced with a wooden picket fence and a deep moat. There are three towers on the territory. The entrance, where the main entrance to Sech is located, is the Small Tower, which offers incredible views of the Dnieper and the bell tower.
On the territory of the historical complex "Zaporizhzhya Sich" you will have the opportunity to visit various premises. You will see household items that were used in those days, get acquainted with the traditional interior of the Cossacks. Having been there, you will be able to feel the whole spirit of that time, to learn about all the crafts of the Cossacks, such as agriculture and fishing. You can feel yourself a hero of that time.
If you do not live in Zaporozhye, but, for example, in the city of Kiev, then not every day you have the opportunity to visit the Zaporizhzhya Sich complex. But there are a huge number of review videos and films about this attraction. In the meantime, you will watch a movie, we will bring you delicious Ossetian pies. The history of our country needs to be known, and it will be much more pleasant to learn it with our pies. Order a food delivery service in Kiev and we will bring pies with heat from the heat directly to your home or office.
Товар добавлен
Перейти в корзину
Callback
Letter to the head
Sign up
Enter