A dish with ancient roots 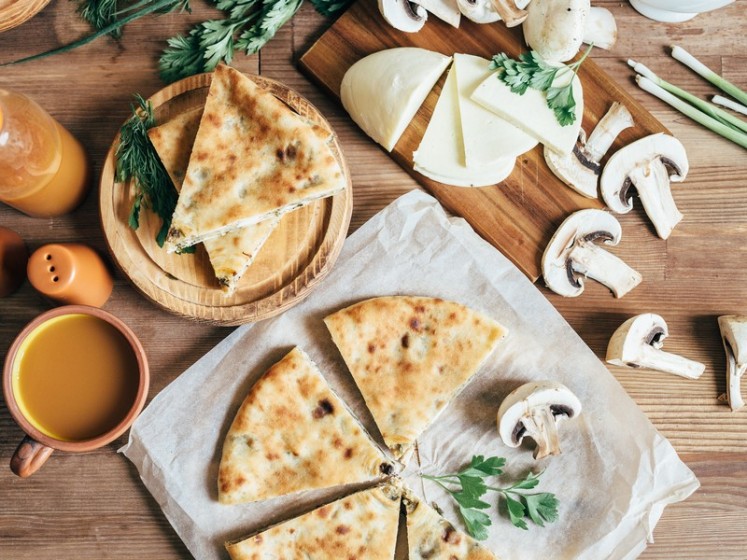 Traditionally, the process of making Ossetian pies is deeply rooted in antiquity. Ossetians have always been considered a deep-believing nation with special traditions. According to population surveys, only 3% of people do not believe in God, 58% profess the Orthodox faith and 39% are the traditional religion of their people. Ossetian pies have always occupied the central place on a huge family table.

Features and differences of Ossetian pies from other dishes

Ossetian pies differ, for example, from Ukrainian baking by the presence of a huge amount of filling and thin dough from water and flour. In Russian pies always put a little filling and a lot of dough from milk, eggs and vanilla. Why so? Ossetian flour and wheat were in short supply. But with the filling never had problems. The people of Ossetia had well-developed livestock farming.

Pies were made from thin yeast-free dough and put a lot of toppings, cheese and butter. In our bakery "Three Pies" in Kiev, follow the traditions of old-fashioned and in the process and many different fillings. If you had a chance to try a traditional dish using too thick dough, then this is clearly a fake. We value the reputation of our institution.

In the North Caucasus, fruits and berries have always grown much worse than in the southern regions. Therefore, it was not often possible to meet sweet cakes in Ossetia. Few people know that a traditional dish is not always round. The ancestors of the Ossetians used treats in the form of a triangle.

There is a hole in the center of the pie so that the filling can breathe and the dough is not deformed during baking. The finished cake is greased with oil, because unleavened dough dries quickly.

The history of the Ossetian pie

Most lovers of Ossetian dishes do not think about why the Ossetian pie looks like this and not otherwise. However, this fact has its own explanation. We will plunge a little into history.

In the 12-14 centuries during the Tatar-Mongol invasion, the territory of North Ossetia was inhabited by the Alans tribes (ancestors of Ossetians). They lived in remote mountainous areas, their lifestyle was sedentary and hectic. The main foods were: vegetables and crops (mainly oats), from which Ossetian dishes were prepared. Pies at that time were considered a sophisticated dish, difficult to prepare.

Given that there was little wheat in the highlands, the thickness of the pellet was minimal. With stuffing, things were different. It was always put in large quantities, because kept large flocks of sheep and hunted constantly. As a result, the best beetroot pie in the world appeared.
Given the nomadic lifestyle, maintaining a yeast culture was unrealistic. Ossetian pies were baked from yeast-free dough. It is known that Ossetian families are large and in order to feed everyone, they always cooked a lot of pies, and baked them in an oven at rather high temperatures.

According to Nart legends, three pies were always served immediately at the table, symbolizing:
Ossetian pies mean three worlds:
According to another belief: putting all three pies on a round table, we get the “Banner of Peace”. It was strictly forbidden to twist Ossetian pies during cutting. They said that twisting the pies, you will change not only your history, but the history of the house in which you are.

Now to arrange delivery of Ossetian pies to your home or office is not difficult. We recommend buying delicious Ossetian pies in the Three Pies bakery, where they are prepared according to the unique traditional recipe of the famous chef Aslan Abayev.
Товар добавлен
Перейти в корзину
Callback
Letter to the director
Sign up
Enter