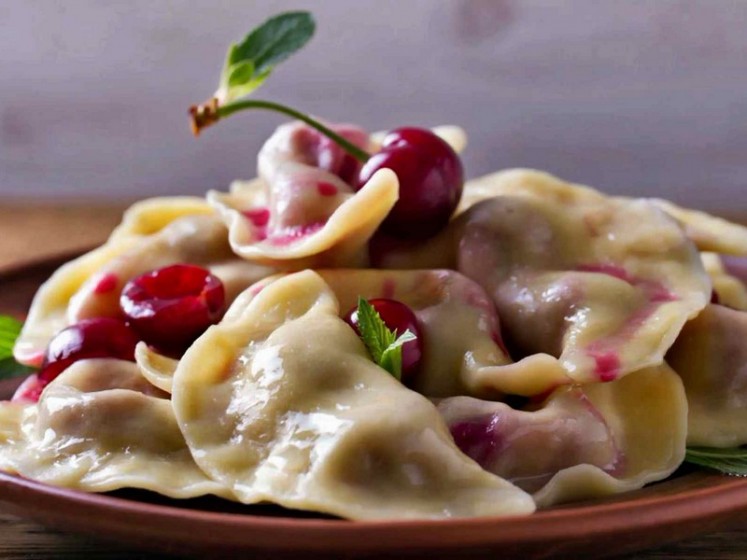 Before telling about any dish of many Ukrainians, we want to remind you that we work every day, so order the pies, and we will bring them to you within an hour.

Vareniki is a national dish of Ukrainians, it is the most popular among other dishes and widespread throughout the country. Dumplings can have various shapes: small, triangular or rounded in the shape of a crescent. Usually they are prepared from wheat yeast-free dough, in which the fillings are wrapped for different tastes. In Ukraine there are more than 40 types of dumplings, but the most popular of them are with: boiled potatoes, stewed cabbage, sweet and salty cheese, meat, cherries, poppy seeds, cherries and strawberries.
Dumplings served with sour cream or with cracklings and fried onions. Traditional Ukrainian fillings are potatoes, cheese, cabbage and cherries. However, in different regions there are different fillings. For example, in the Poltava region they cook dumplings with peas.

The history of Ukrainian dumplings

The name "dumpling" is derived from the word "cook." And the recipe itself, as it turned out, was taken by the Ukrainians from the Turks. The Turkish dish is called dyush-var. To taste this dish strongly resembles our dumplings, which is probably why Ukrainians liked it so much. However, ours were not taken aback and began to stick other fillings in the dough. So actually our Ukrainian dumplings arose.
After that, dumplings began to cook in Ukraine for every holiday and Sunday. And most interestingly, dumplings were even prepared in order to give the newlyweds a wedding or a pregnant woman.
Dumplings were also prepared as sacrificial food, and brought as a gift to the goddess of water. People believed that dumplings have magical properties. That is why, the girls on Andrey cooked dumplings and performed various ceremonies and fortunetelling on them. One of the most interesting fortunetelling for the girls was: "Dumplings were set in front of the cat, and whose dumpling he eats, that girl should get ready for the wedding, and if she only bites and leaves, it means that the girl is doomed to divorce or loneliness."

Dumplings in the literature

Dumplings take not the last place not only on the table, but also in Ukrainian literature. Many writers loved dumplings so much that they dedicated poems and humoresques to them, and also described them in their works. For example, Gogol in his novel "Viy" describes in detail a dumpling with a diameter of 40 centimeters, the size of a hat. And this is not surprising, because initially, there was no certain size of dumplings, and everyone made those that he considered necessary. The Ukrainian writer Rudansky wrote in his humor:
“Sit Muscovite on the counter,
Prischuryuє och ....
So the nobility: Moskalina,
Varenikov want.
Want b_dniy varenikіv .... ”
As a ritual dish, people ate dumplings during the harvest, and thought that this affects the fate of the crop. That is why in a large number of songs of genius, people remembered dumplings.
Interesting facts about dumplings:
- dumplings were borrowed by the Ukrainians from the Turks;
- lizards - this was the name of the first Ukrainian dumplings;
- in Cherkassy there is a monument in the form of a two-meter dumpling;
- Golden dumplings awarded the best culinary specialists of our country. This tradition was started in 1999;
- there are many varieties of dumplings, ears, manti and ravioli, one of them;
- for dumplings there is no certain size and shape. In different regions of Ukraine they are different;
- Ukrainians cook dumplings with a surprise for the Old New Year, which is celebrated on January 14. In such dumplings, various things are added to the filling, for example a button or beans;
- The official symbol of the city of Glendon, in Canada there is a dumpling. Its height is 9 meters and its weight is 2700 kilograms.

However, not all Ukrainians love dumplings, a significant number prefer delicious cakes. With us you can order Ossetian pies even home, because every day we have delivery in the city. We deliver pies to the office, we can also deliver home or wherever you want.
Товар добавлен
Перейти в корзину
Callback
Letter to the director
Sign up
Enter